On the hunt for a Chupacabra

Yesterday Me&Bucky placed a couple of caches about 3 walking miles from the northern 215 loop, so I figured I’d head out and snag them.  After just 1 day, who would have guessed I’d be the 3rd finder?!?!? 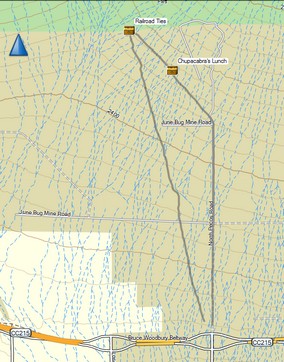 I parked on Pecos road and wandered north from there.  The walking up the old gravel road was SLOW.  It was soft and sandy and a little rocky, I found that walking off of the gravel road in the desert was much better.  The ground was very firm and the walking was easier.

This trek was 6.4 miles round trip and I picked up 2 geocaches. 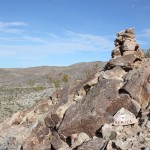 Went down south on the east side of 95 where some of the Eldorado series is, and did the veteran’s series. These are caches placed by chappnhappydog honoring soldiers, sailors, airmen, police, rescue, and even youth scouting programs. Pretty cool! 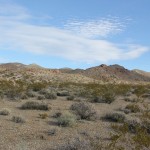 I finished the new Male Symbol series today.  It took 2 days, about 6mi per day, and was 61 caches.  The walk was easy and it was a lot of fun.  Especially considering the temperature is finally down!!

See the Male Symbol Series page, at the top.

oK… so this is not for good, but 18 Sep 2013 will be the final day of my current geocaching find streak.  I have been caching since Feb 2012, and starting 3/13 I have cached every day up until tomorrow.

But there are no caches within 5 miles or so of my house or my job, and it’s becoming a chore to force myself to leave the house and find a cache in the evenings when it’s a min of 30 minutes and 1 gallon of gas in my truck.

Besides, I can tell my beautiful wife that I’m stopping for her, since 19 Sep is our 27th wedding anniversary and I told her I’d spend the evening with her.  🙂

On 8 Sep 2013 I was in St. George for the Earth Cache Mega event.  I stayed for the lectures and for talking to people.  I really enjoyed it and it’s motivated me to finally publish an EC or two.

While in the area, I camped at Snow Mt. State park.  It’s a beautiful campground in a red sandstone and basalt valley.  Very nice place!

North of St. George I drove up FR033, an incredibly scenic road and did some caching.  Turns out there were some LONELY caches up here.  Lonely meaning it had been a while since they were last found.  So anyway, I was up to almost 6,000′, the road was fine (a little bumpy) and the views were fantastic!!!

If you’re caching through St. George it’s a wonderful scenic drive.  I didn’t finish the loop, I had to head home, but for as far as I went 4WD was NOT needed.  I would recommend high clearance though, or of course a rental works too.  😉

Day off and caching!

So I had a day off of work and I headed south towards Laughlin to work on some of the Eldorado! series of caches…

So first, the traffic sucked.  I’m heading down 95, towards the 15, and the flashing light over the road says ‘accident on 95, expect delays’.  So I grab the first exit, along with 2,384 other cars, and head south on Decatur.  I glance back at 95 as I’m exiting and it’s a fucking parking lot, as far as the eye can see.  Ok, so first good move.

Oh wait… now where did I leave that GPSr???  REALLY???  You have got to be shitting me!  So I grab the next exit, I’m about half way between LV and Jean, and I search for my GPS…. and it’s not here.  I had to have left it home.  I’m heading out geocaching and I forgot my GPSr.   Now funny… NOT!

So I look at my cell phone, you know… the one with the half dead battery, and I notice there is a cache near where I pulled off the highway…  I turned on the GPS on my phone and went to grab it and actually found it!  I was a little surprised because my phone does not have the greatest GPS receiver.  So, I decided instead of going home I’d take my chances with the cell phone.

Long story short it worked out just fine.  I didn’t head another hour down to the Eldorado! series since there were caches where I pulled over, and I ended up grabbing an earth cache, an old virtual, and 30 traditionals down the old Las Vegas highway.

My daughter is home for a couple of weeks before school starts again (she’s a senior at  UNLV!  Whoot Whoot!!!).  So it was 110° in Las Vegas today and we decided a drive up Mt Charleston was in order.  We were in her Chevy Cobalt so no off roading, and since my foot hurts from a strained tendon, no long hikes.

But we did manage to grab a couple of fun caches starting with a Mr. Bison (I LOVE THESE CACHES) near 95 and Kyle Canyon, and then a few close-by caches along the road.  When it’s summer time and hot in the city, this is a great place to go! 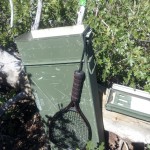 Summer is winding down

If you live in Vegas you know that it’s true… summer is winding down.  The high all week is supposed to be right at 100° and today it only hit 99.

I took the bike to work and decided to stop for a cache on the way home.  I headed over to Shadow Rock Park and grabbed one of fyrcanine’s caches.  Steve is one of the top cachers in the state and has quite a few hides in the area… including the OST series!  He has 70 caches along the Old Spanish Trail as it winds through Las Vegas and out of town.

It’s pretty cool.  Some of the caches are not in great areas… I picked up one downtown that said to only visit it during daylight hours with a friend.  🙂

Anyway, I did a two’fer… stopped at the park, had a beer and searched for his well camo’d hide there, and walked out to one other nearby cache.  All-in-all a great afternoon.

This one has been on the books for a while, the description makes it sound tough but it’s just a few miles walk.  The cache is “Rock An Out & Back 5K” and I grabbed the dog and the bicycle early on a weekend while it was still cool and headed out.

I was happy to be first to find on a pretty cool cache with great cammo.  The ride up the hill was a fucking pain in my fat ass because well, I have a fat ass, but the ride down was outstanding!  The dog enjoyed the run as well, and found a rabbit to chase, just about the time I got to the cache.  🙂 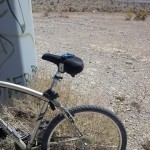 So I went out to grab a quick cache this evening.  It’s 104° in Las Vegas, and the sun was going down, so 104 wasn’t half bad!  I fired up the Chrysler and put the top down, grabbed the dog and headed out to a park on Lone Mountain Rd, about 4 miles from the house.

Unfortunately, the car overheated not even half way there… a not-uncommon problem around here in the summer.  So I pulled over, walked the dog, and waited for the car to cool.  When it did, I decided to head home and so here I am, driving through the city, with a hot car.  To get it home, I would start it up and accelerate a short time towards the next light, and then turned the car completely off and coast!

I did that over and over, only starting the car when I needed some more speed before coasting for a while.  Good thing it was late in the evening and there was little traffic.  🙂

I finally got home after about 20 more minutes (remember, I’m less than 2 miles from the house) and hopped into the pickup.  I chose a closer cache since it was starting to get dark, and headed north for about 3 miles.  Yup…. half way there the batteries in my GPSr died.  🙁

Long story short, after a couple more misadventures, I fired up the cell phone, looked at the map and headed out for the cache w/o a GPS.  :-()  The beauty of all the Tin-For caches is, they’re hidden exactly the same way!  So once I got close, I knew what to look for and eventually I found the cache!!!

The Tin-For series in Las Vegas was hidden by Clay4 (one of the guys that brought us the ET Highway).  There were nearly 60 at one time, but as they come up for needing maintenance or as missing, he deletes them.  He has about 150 caches of his own right now, not counting the THOUSANDS along the ET Highway north of town, so he’s pretty busy.  Since I know he deletes them when they come up for mx, I always bring logs and plastic bags when I grab one of these caches.  Just in the last week or so, I’ve placed out 3 new logs and added 4 baggies to keep the logs dry.  I hate to see these caches disappear, there are only 9 I haven’t found, and they are a large majority of the caches in NW Vegas.